Securing your network by finding the vulnerabilities, like a hacker

Red Team testing as the name suggests is the assessment of the organisation network by trying to hack it. Red Team is the group of professionals responsible for emulating a genuinely malicious threat actor trying to break into the systems.

Real-world hackers don't follow any rules and methods, for exploiting the limitations of any testing programs. They will deploy any method to gain access, seek a point of entry for a successful breach. At times their passive attacks may exploit the organisations for a long time as they remain unnoticed.

A commonly employed method to breach an organisation's external security is combining social engineering and phishing. There are many ways to breach the first line of defense that depends on the human factor. Once the hackers get in they can steal sensitive data, deploy ransomware or exploit the organisation's resources. 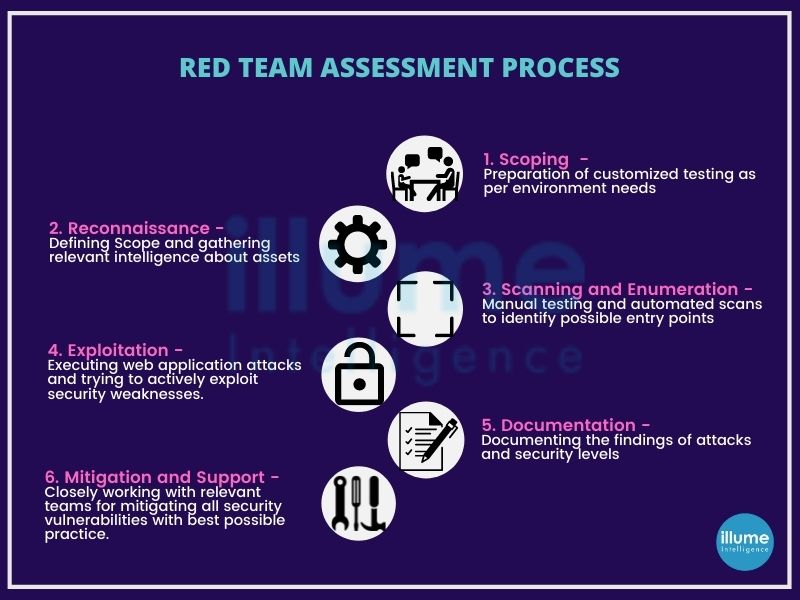 With the increasing size of the organisation, the attack surface also increases and the difficulty to secure and monitor all the endpoints and users. It may be assumed that penetration testing is a great method to secure the services, but it often focuses on a specific asset and has a defined scope.

These assessments are designed to emulate a more real-world scenario, with detailed analysis and defensive strategies. It also includes evasion and persistence, privilege escalation, and exfiltration. The Red team will test the organisation's detection and response capabilities.

How does Illume's Red Team work?

4. Exploiting vulnerabilities - Accessing the system for looking for further weaknesses and loopholes.

5. Escalating levels - Escalating the level of access to reach the target.

6. Success - Achieved and accessed the target.

Book a free consultation call for your organization

TALK TO OUR EXPERT
Discover Our Latest Resources - Blog